Coupling a soft Junmai Daiginjo sake with an award-winning sleek silver bottle and a nod to Japanese shinto mythology, Four Fox Sake aims to bring high-grade Japanese rice wine to a mainstream Western market, in a very swanky vessel. Launched by four friends three years ago, the drinks label has so far partnered with high-end nightclubs and cocktail bars across Hong Kong, Singapore, Japan, USA, London and Australia, all in an attempt to corner a very specific niche. “We wanted to create this ultra premium sake – very sexy, very contemporary – something that people were going to desire,” explains Managing Director Michael Campion. Despite centuries of heritage, sake has long been the underdog of the Western liquor market. “There’s no real branding or differentiation between most bottles of Japanese sake. They’re all fairly identical with brown or green glass,” Michael remarks. “Nothing sticks the way it does with all the major vodka or champagne brands, and that was the genesis of our initial idea. It all snowballed from there.” 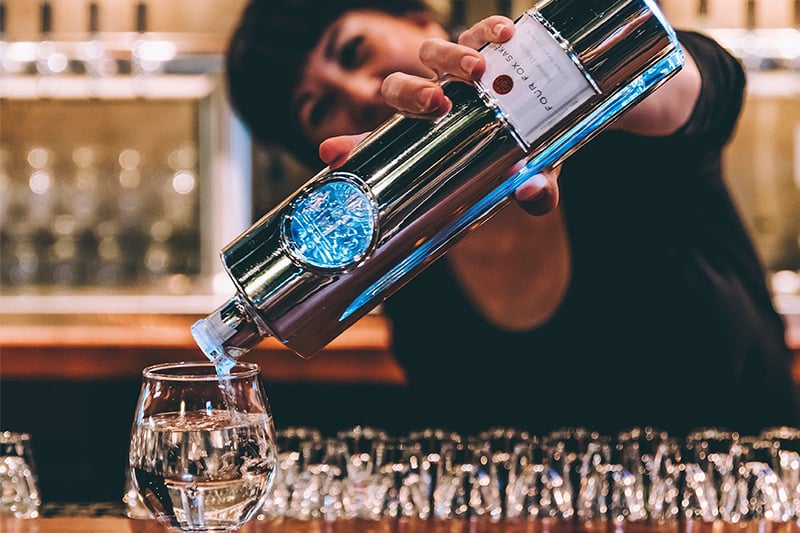 Four Fox Sake began as the brainchild of friends, the four original foxes, a passion project that spun out of control. Left with a bottle of sake at the end of a wedding, founders Neil Hosie and David Innerdale began to question why this deliciously moreish drink was only ever available at niche Japanese eateries. Banding together with Andrew Rizkalla and Tsubasa Nishitani, the four launched into action, signing a contract on the back of a napkin to secure their brewery. “It all happened very quickly,” Michael laughs. Four Fox Sake now produces and distributes a premium Junmai Daiginjo sake, the very highest grade, made in partnership with a 150-year-old Niigata brewery located up in the mountains several hours west of Tokyo. 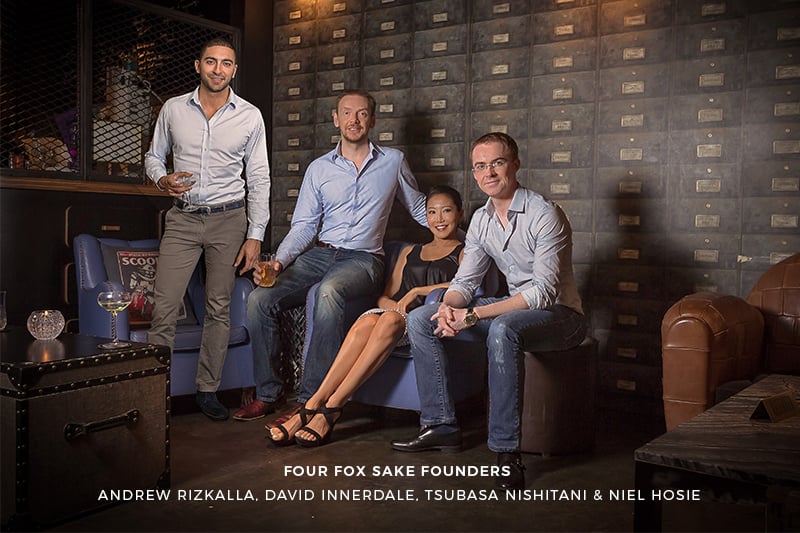 Four Fox Sake prides itself on the purity of its blend. “We used our brewery’s expertise and their guidance to create a recipe that was 100% Four Fox,” Michael recounts. The sake combines Niigata’s pure snow water with finely polished Gohyakumangoku rice to produce a soft, less aromatic and more drinkable composition. Unpicking the terminology, Michael explains that “Junmai” indicates an adherence to the traditional practice of leaving the rice alcohol pure without adding ethanol, while “Daiginjo” refers to the polishing of each grain of rice for 48 to 72 hours until it’s at 50% of its original size or less. “It requires almost constant attention,” he stresses. “The temperature is so important, and you’re looking at about eight weeks, end to end.” 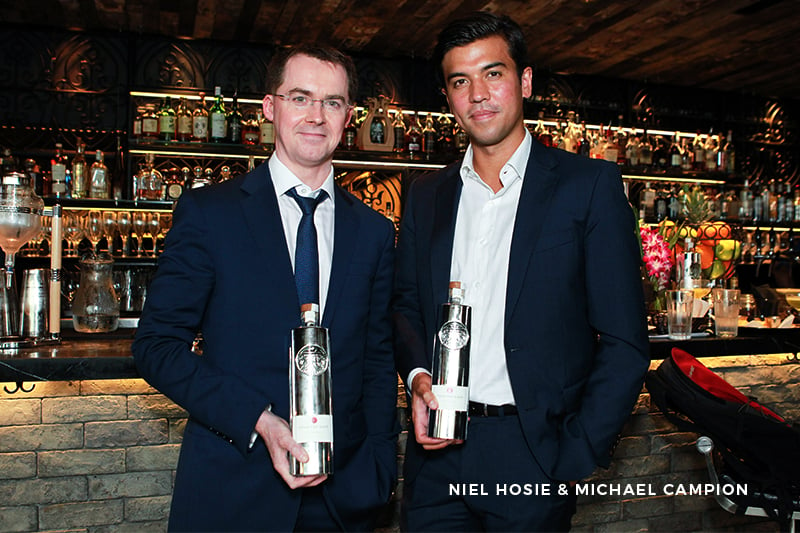 Branding has been key for Four Fox Sake, and is a vital part of their market offering. Their reflective and very distinctive chrome bottle, designed by multi award-winning Vancouver-based Carter Hales Design Lab, was created to reflect the clean elegance of the rice wine within. Exuding a sense of cutting-edge modernity, it still draws inspiration from Japanese culture, coming embossed with a samurai sword, while the logo itself is set against the sacred Japanese temple Torii gates which symbolise the transition from Earth to Heaven. Depicted in the crest, four foxes, representing the four founders, give a nod to the fox spirits of Inari Okami, the god of rice, sake, swordsmiths and foxes. And finally, the label mirrors the Japanese flag, positioning a red dot against a white background. Little by little, Four Fox aims to change people’s muscle memory. “Most of the time, people aren’t consciously thinking about what they want to order,” Michael explains. “Instead of instinctively asking for a gin and tonic, or a vodka soda, I believe there’s definitely room for the more experimental drinkers among us to demand sake in mainstream bars and cocktail joints.”

With sake exports growing to 18.7 billion yen in 2018, marking the eighth consecutive year of record-setting export volumes according to Japan’s National Tax Agency, overseas demand for sake is only expected to increase and Michael is optimistic. “I’d like to think we’re at the start of what’s going to be a quite a big wave,” he says, although he recognises that Four Fox is one of a few brands taking this westernised approach. “I’m hopeful we can be the first premium sake brand that everyone is aware of, and I think the real test of that is when someone walks into a bar in London or LA or Sydney and says, I want a bottle of Fox. That’ll be the day that I know we’ve made it: when you have that brand call, that brand recognition instantly.”

Japan Will Launch “Go To Eat Campaign” in September