Houseparty: The Viral Video Alternative to Zoom Amidst COVID-19?

Touting over 2 million downloads worldwide within the span of a week, Houseparty is a casual video app gone viral that heralds an era of heightened communication amidst global lockdowns.


With up to a third of the world’s population in lockdown as a result of the COVID-19 pandemic, people are turning to video calls as a replacement for face-to-face communication. While universities, corporations and even governments have been using tech unicorn Zoom’s video conferencing services, a rival video app has been making quite the buzz in more informal settings. Meet Houseparty, a self-proclaimed ‘face-to-face social network’ that’s rocketed to app stardom, raking in over 10 million downloads on Android’s Google Play store (and no doubt countless more on iOS platforms). The Financial Times reports the app has recently had 2 million downloads in a single week in mid-March alone. Launched in 2016, the app offers the ability to host up to 8 participants in a live video call on both mobile and desktop platforms and was acquired by Fortnite developer Epic Games in mid-2019, raising USD 70.2 million in investor funding to date. We take a closer look at how this so-called party app has gone viral. 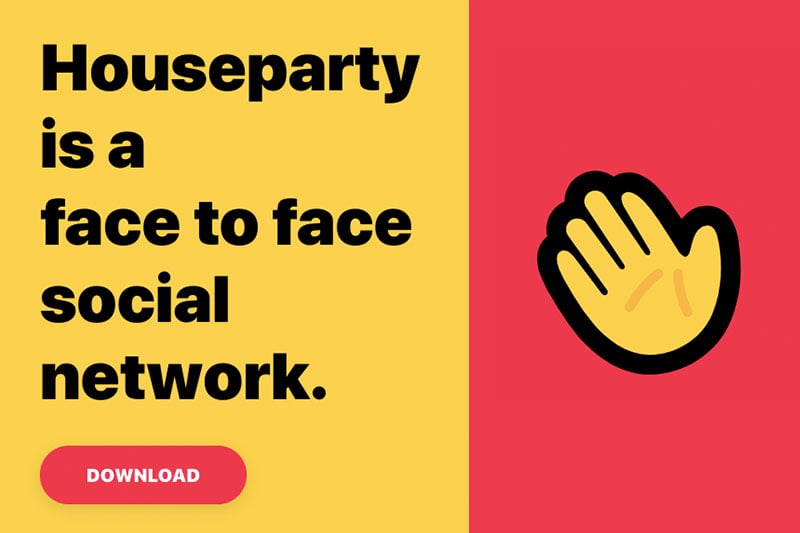 Originally designed as a free-to-use party app aimed at younger, digitally-savvy users, Houseparty touts cheerful colours, a familiar social media-based user experience and a casual tone paired with fun, interactive games (think trivia, charades, etc). However, with the onset of COVID-19, its popularity has surged among older users who have turned to it as a vital tool for communicating with their loved ones. Houseparty users tend to spend, on average, 51 minutes on the app every day – unusually high engagement levels compared to other forms of social media. Vogue has even heralded Houseparty as “the quarantine app you need to download immediately.” Based on a core concept of casual, spontaneous convenience, it allows users to pop in and out of ongoing group conversations which are ‘unlocked’ by default, and alerts you when a friend hops online.

Although Houseparty doesn’t quite match up to Zoom’s impressive functionality – up to 100 participants for free, and up to 500 participants on their paid plans for enterprises – it has the potential to play a major role in fast-and-loose communication, perhaps even in the workplace for on-the-fly internal communications or brief updates with clients. Furthermore, there has already been speculation as to how this promising app will keep up its momentum after lockdowns ease up. Houseparty co-founder Sima Sistani has indicated the firm will be looking to develop “ways we can make money by bringing value to our users, not extracting value from them,” according to The Verge. Whether that might involve running behind-the-scenes campaigns for major corporations, helping to build a more approachable persona for celebrity brand ambassadors, or generating buzz around an upcoming launch, it remains to be seen how Houseparty’s business model will continue to evolve as the pandemic situation unfolds. As for data privacy concerns, video apps such as Zoom have recently come under fire for a history of patchy security and extensive administrative powers including the ability to join the call without prior warning, view any recorded call, and access a dashboard of users’ total meeting minutes, as the BBC reports. This begs the question: does Houseparty share these security limitations? According to Forbes’s interview with a cybersecurity expert, there are apparently no obvious security flaws, although the app may collect de-identified location information (which, in conjunction with other data, can still be used to identify specific users and their location) and other user data for targeted advertising. As digital communications and the sharing of confidential personal data become increasingly commonplace in the workplace, there is no doubt that there is a growing awareness (and concern) among users around data privacy, especially in the wake of the 2018 Cambridge Analytica scandal. However, for now, users are forced to walk that precarious line between convenience and security – even for video apps like Houseparty.