Local Goods Made From Local Trash

With his cleverly upcycled products and workshops, Hong Kong-based Kevin Cheung is seeking to solve his city’s urgent waste issue, and urges us to think twice before we dump our stuff.

Kevin Cheung spends his days rummaging through trash, working through the dust and din as he hammers and drills in a bid to breathe new life into unwanted scraps of rubbish. Whilst his parents haven’t always regarded this as the wisest of career choices, the 31-year-old product designer is determined to tackle his hometown’s catastrophic waste problem head on.

Since the establishment of his eponymous upcycling design brand in 2010, Kevin has transformed huge numbers of unwanted materials into decorative pieces that are both desirable and, more importantly, functional. His works have brought collaborations with organisations such as LG Electronics and Greenpeace. We talk to Kevin, AKA the self-styled ‘rubbish guy’, to learn more about why he began his journey in upcycling, and how he hopes to change people’s perceptions of trash and galvanise his fellow Hongkongers into action. 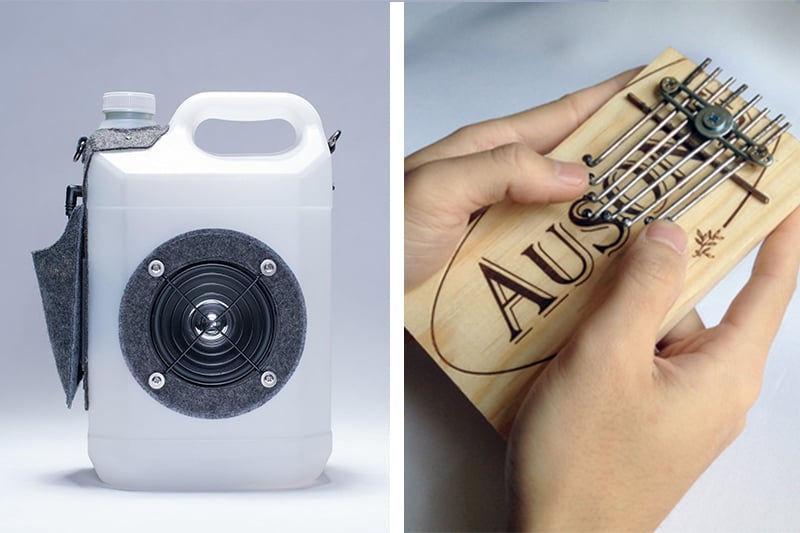 Nestled in the Blue House Cluster, a famous Hong Kong landmark and UNESCO World Heritage building in Wanchai, is Kevin’s bright and spacious studio home. Upon stepping into the flat, he tells us that most of what we can see are recycled materials, collected and repurposed by Kevin over time. “Growing up, I was never an environmental enthusiast. But I always enjoyed drawing and creating. I was a terrible student, I may have flunked all my subjects, except art,” he begins, chuckling to himself. “Once I got into design school, I was instantly hooked by what we learnt there. It showed me how I could actually turn my drawings into tangible objects that people would use and benefit from. I immediately knew that that’s what I wanted to do in my career.”

Despite his newfound calling, Kevin jumped at a job opportunity offered by a big battery company. But not long after he started, he realised the jarring discrepancy between his aspirations and the actual reality of working in the design industry. “At school, I was taught that every design begins with a problem. In the profit-driven world, however, product designers are only interested in making fancy-looking products that boost sales. They often fail to take into account the afterlife of their creations,” he says, sighing. “Sometimes when I look at the waste problem depicted on television, I feel guilty, as much of those discarded objects are actually created by product designers like me. So I began to question myself, and my career.” Kevin set about using his skills to rectify the situation. “My initial idea was that, instead of continually draining new resources in order to create new products, I should actually be making use of the abundant amount of waste materials present in Hong Kong. If you take a closer look, a lot of them actually deserve a second life,” he explains. In 2011, after much experimentation and many a late night, his first upcycled creation – the boombottle – was born. The portable speaker, which had been reshaped from a plastic container, was an impressive makeover, but it was only the start. His innovative take quickly garnered much media attention and widespread public recognition. He even got invited to represent Hong Kong at the DMY international Design Week Berlin later that year.

This initial success and positive reception proved to Kevin that he was heading in the right direction, prompting him to quit his job and devote himself full-time to developing his brand – not that that was easy. “In the early days, finding stable sources of waste material from big corporations was almost impossible because, back then, they were less willing to disclose the amount of waste they generated,” Kevin recounts. “On top of that, Chinese locals have always associated used materials with bad luck. So people were quite skeptical about this whole upcycling concept.” Occasional frustrations and setbacks notwithstanding, Kevin remained determined to effect real societal change. “For the majority of the population, recycling is just a three-colored bin, a bit of extra work that doesn’t seem to pay off. Upcycling, on the other hand, demonstrates to people how their waste can be revived into objects with a higher intrinsic value than what they had. It talks to those who care about the environment, but it also reaches outward to those who’ve never paid attention to those issues.”

Currently, Kevin is selling his upcycled products at six retail outlets across Hong Kong and Macau, with a mission to get more people on board. All of his seven items, from his plastic-container-turned-boombottle to his rice-cooker-inspired bicycle bell and wallpaper-made wallet, are manufactured with local waste. “Everything – from the material and the design to the manufacturing – revolves around the motto ‘Made in Hong Kong’, as I’ve always believed that every place is obligated to deal with its own waste. I hope to weave social responsibility into our practices.” In addition, his products are assembled at the St James’ Shelter Workshop in Wanchai, providing job opportunities for people with disabilities. He is also collaborating with schools, corporations and organisations to host sustainable related events and holds regular educational workshops.

“I don’t want people to just buy a product and leave, my goal is to allow customers to take part in the process of transforming their own waste into something they want to purchase again,” he explains. “It’s easy to point the finger at others and shirk responsibility, but caring for the environment should be a duty we all undertake. It’s not our choice to decide whether we care or needn’t care. The planet is something that we all share, and if we all just wait for others to take up the task, then there’s really no point in talking about the future because we won’t have any future at all.”

Upcycling in a Local Fashion