Chris Tilbe of Makara Surf is on a mission to create awareness of Hong Kong’s devastating sustainability issues by manufacturing eco-friendly surfboards.

Stacked full of determination and resilience, Chris is a man of morality who sticks to his cause – no matter how tricky that may be. Hailing from the West Coast of Canada, he grew up on Vancouver Island and has been close to wildlife ever since he could walk. In 2002, he jumped on a plane to Hong Kong in search of career opportunities, which resulted in him opening a boutique sourcing management business where he gained invaluable experience in how the manufacturing process works. Today, he combines that industry experience with his big love: surfing. “I windsurfed back at home,” he says, “but not anymore — all I do now is surf. And it was my passion for surfing and background in manufacturing that led me to start hand shaping surfboards.” Starting from HK$4,400, each hand-made board takes upto 4 weeks to make. After cutting and shaping the surfboard, Chris coats each one with a plant-based epoxy resin, whereas other companies use mainly fast-drying petroleum-based epoxy resins for mass manufacturing which is extremely harmful to the environment. The coating time for commercial surfboards takes around a couple of days, whereas Chris takes 6 days as he needs to give each board 3 coats to make it water-proof. He sources all the materials he can locally. “My value is that, if I can buy it in Hong Kong then I don’t need to import it from another country.” And, through word of mouth and his distinct message – not to mention his unusual location on Tap Mun, an island in the North-eastern region of the New Territories that’s accessible by ferry from Wong Shek pier in Sai Kung, Makara Surf is making waves. “I get a lot of random people coming into the store and being surprised that there’s a surfer making eco-friendly surfboards on this island. They take pictures and share them on social media, which really helps me gain attention.” Makara Surf, however, is about much more than a love of the sport. With firm opinions about protecting our oceans, Chris has created a company with a specific message and drive at its core, and these days it is this, as much as his love of surfing, that informs what he does. It was back in 2002 when Chris first became aware of Hong Kong’s marine issues. “If you take a ferry to Tap Mun Island, you can see the white dots of polystyrene generated from the fishing industry floating on the sea,” he explains, citing a lack of environmental education in Hong Kong as mthe ain issue at blame here. “People believe marine waste comes from the mainland, but as the EPD states, 95% of the rubbish comes from local land-based sources.” He explains of general opinion, “people are not taught how to value the environment so they don’t pay attention to where their trash goes. Which makes it easier to throw things in the garbage rather than at recycling points.”

He has come up with a firm proposition in his fight against all this with his ‘1% Initiative’ scheme, as mmodelledby his own company. Using sustainable methods, Makara Surf aims to produce each board with only 1% of waste. “We calculate that waste percentage by taking the weight of the waste produced and comparing it to the final weight of the product. If the surfboard weighs 2.2kg, then we aim to only create 1% of that weight as waste, thus giving the idea its name of ‘1% Initiative’.” And now, he aims to take this idea and relay it to others. “I want to show companies that they can still make a profit whilst being sustainable because I believe it is achievable. I began to change my ways through research on how I could reduce my impact on the environment at Makara Surf.” And, as far as he is concerned, there’s no reason others shouldn’t, too. 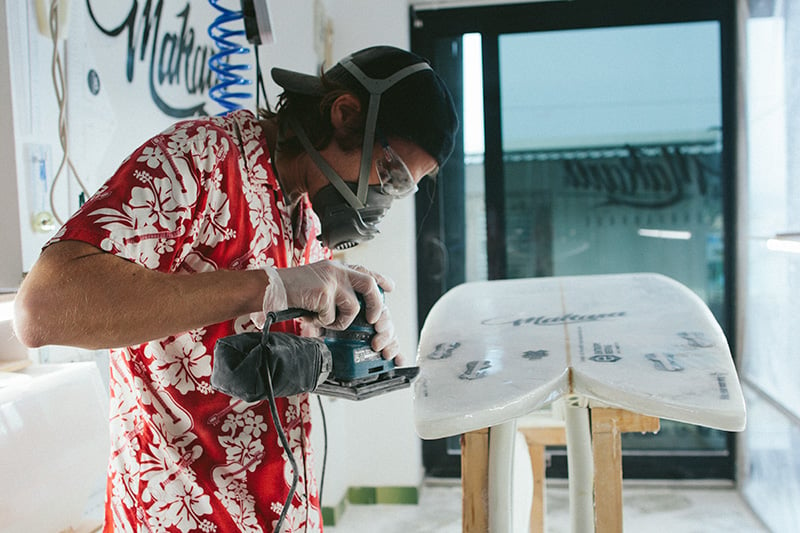 However, persuading them to join him has not been an easy task. Aside from contacting corporate companies such as McDonald’s, Starbucks, Circle K, and 7/11, Chris has found it difficult to reach out to local companies. “In November 2016, I went to a meeting with the AFCD (Agriculture, Fisheries and Conservation Department) and proposed to permanently exhibit the negative effects of marine waste and our poor records on it, only to be turned down because ‘plans for the educational package are to be more cconservation-related.” Hong Kong right now doesn’t understand the importance of cleaning up waste and creating awareness.” He also isn’t part of a local industry with much of a network. “There are other surfboard shapers in Hong Kong of course, but they don’t have trademarks and they’re not doing it as a career,” he says. His biggest hope is that one day a pro surfer will catch a wave with his board, helping him raise awareness significantly.

When asked how we can help, Chris advises us to do our homework, whether that’s on an actual product or on wider business practices. “A lot of the time, companies will market themselves as an eco-friendly company, but you need to find out how they claim to be eco-friendly.” In terms of businesses, he says that detailed waste charts can be produced to track, control, and limit waste, which helps projects get on track and reduces material expenses. Chris also wants us to reset our priorities. “Entrepreneurs nowadays have this checklist of must-have things within the first year such as an office or a BMW. They shouldn’t focus on this. Get your hands dirty and work hard. Good things will come later.”