Professional MMA athlete Ramona Pascual has fought tooth and nail to establish herself in a male-dominated industry. Forging a path across Asia, she’s left the corporate world to realise her full potential.

Mixed martial arts expert Ramona Pascual grew up in a conservative Chinese-Filipino family, wanting to make her parents proud. So, when she left the corporate world aged 27 to pursue a career in martial arts, she took a terrifying step into the unknown. Three years later, she’s kicked some serious ass, bringing home a double gold at the 2015 Abu Dhabi World Professional Jiu-Jitsu Championships, two titles at Asia’s 2018 Master International Championships and becoming the first woman in Hong Kong to ever headline a fight event.  Changing widespread misconceptions surrounding MMA one fight at a time, last year, she gave a TEDx talk on fear management, channelling the high-pressure decision-making MMA requires into bite-sized, relatable advice. “No parent wants their child to go into a cage and fight someone else for money,” she laughs. “But, if you don’t enjoy something, you’re not going to get to the highest level. There’s always going to be adversity, and some people will give up purely because what’s on the other side is just not worth the pain and the effort.” 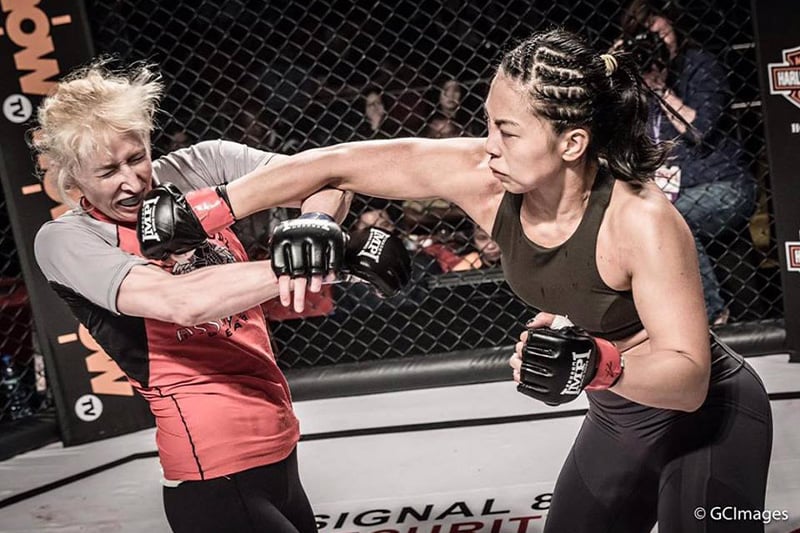 Right from the start, Ramona had the odds stacked against her. Growing up in a traditional Asian family in Hong Kong, she grappled with the values she had been raised with. “Knowing my parents had put all this money into my education, into my business degree, going into a career in athletics would be wasting myself,” she shares. “That was really ingrained in my mind.” It wasn’t until 2015, at the relatively late age in fighting terms of 27, when she spent two weeks training her heart out in LA that something clicked. “Even though I was training and pushing myself, I was just so content,” she recalls. “I met a lot of like-minded people who were also pro fighters, and I was like, you know what? This is something I could do.” Diving headfirst into a gruelling career in MMA, Ramona’s since proven that success comes in more forms than one. As a lone female athlete in a traditionally male-dominated industry, she’s setting precedents for other women venturing into MMA, opening up the sport to a wider demographic. “I’m forging this path on my own, without anyone to look at because there are just so few of us in Asia,” she explains, attributing the lack of female fighters in Asia to cultural barriers, immature infrastructure, and the physical toll that MMA takes. The profession itself is high-intensity, mentally and physically stressful, and even heartbreaking at times. All about “high-pressure decision-making with a lot of physical consequences,” the fights involve exceptional focus and mental resilience. “There’s no emotion. You’re just trying to execute and react,” Ramona explains. “One small mistake and you lose that fight and everything you’ve worked for. Or worse, you get really badly hurt.” For Ramona Pascual, MMA has been a crucible, tempering her body and mind to withstand enormous pressure. “You only really get to know yourself when you experience adversity,” she explains, “and MMA’s done so much with putting everything in my life into perspective.” Speaking to young adults, she counsels them to “pick the harder choice if you’re choosing between two options. Don’t settle for the comfortable choice because all your growth is going to come from discomfort, from adversity, and your ability to overcome that.”

“MMA’s a short and sweet career,” she laughs. “You can only get punched and kicked for so long. I definitely want to give this everything I can. If I can take this to the highest rank, I’m going to do that.”  And then, going forward, she hopes to create more opportunities for those coming in her slipstream. “I’d really like to be able to give back to kids going through the same crossroads I went through,” she says. “I hope to be an example that you don’t have to be killing it in school, or even in your 20s. You could hit your stride late 27, or even later. Don’t be so quick to judge yourself.”