The amount of debris floating in space has hit a critical point. Find out how Astroscale, Forbes Japan’s startup of the year, wants to solve the problem, spring cleaning space with their dancing satellite.

According to NASA, more than half a million man-made objects, ranging from coin-sized rocket scraps to defunct satellites the size of a double-decker bus, are currently orbiting above us at a speed 20 times faster than a bullet – a velocity that makes even a tiny screw strong enough to strike a working space station with the force of an exploding hand grenade. Previously, Oxford University researcher Dr Nikita Chiu laid out the facts regarding the detrimental impact of space debris. Now, recent winner of Forbes Japan’s startup of the year award Nobu Okada and his space debris removal company Astroscale are making their case for developing the technology and revenue model to clean it up. Nobu is not an engineer, nor is he a rocketeer. And, if it wasn’t thanks to a mid-life crisis, he would never have kick-started his space career. “I was 39, and I had no idea what I should do in my 40s,” remembers Nobu, who, by that time, had spent 16 years building a whirlwind career in management-consulting firm McKinsey & Co, the Japanese ministry of finance and stints running 2 IT companies before becoming the vice president of Bain Capital. It was a desire for change, however, that made him want to give his childhood space fantasies a go. 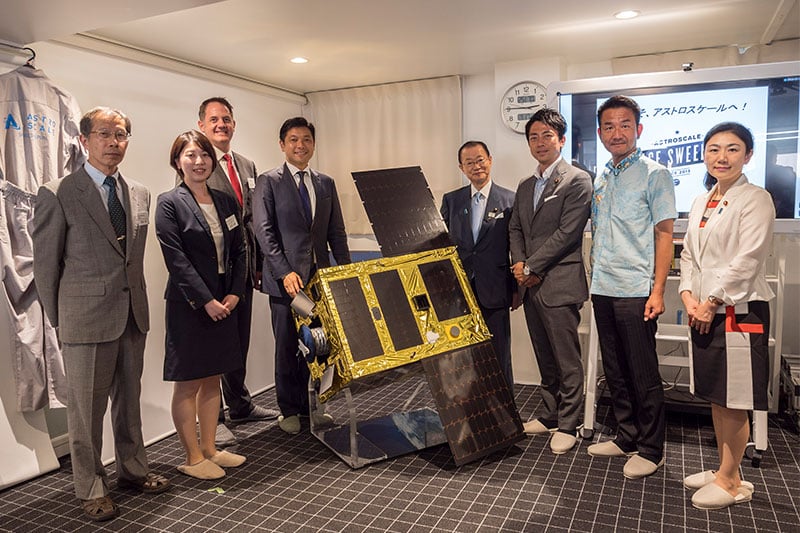 Reigniting an interest first identified at space camp aged 15, Nobu quickly identified space debris as an area he wanted to explore. As he puts it, “space debris has become a growing threat in the industry.” First highlighted in 1978 by NASA scientist Donald Kessler, the risk attributed to this debris is that each and every collision it creates could generate more fragments and in turn lead to an unstoppable cascade of further collisions. Eventually, this could render Earth’s lower orbit impenetrable, wiping out the satellite infrastructure we rely on every day for information, entertainment and telecommunications. “Research had been done, solutions were proposed, but I didn’t see any actions,” says Nobu of the topic. As he sees it, the missing enabler has been commercial incentive. “My belief is, governments and international frameworks may be able to shape the discussion, but it’s up to commercial companies to solve the problem.” And, if they can do that, there is plenty of opportunity for significant commercial success. Forbes has projected that the space debris monitoring and removal market will be worth around $2.7 billion by 2021.

This is where Astroscale weighs in. Founded in 2013, it kicked off with a huge research mission. “These technologies did not exist when we started. There was no answer from Google,” Nobu recalls. “So, for the first four to five months, I was intensively reading through papers and discussing my questions and hypotheses with each author.” With the same fortitude and stamina, he built his team, the majority of whom are top engineers from NASA, ESA and The Japan Aerospace Exploration Agency (JAXA). “I met them during those conferences. I approached them and bothered them, that’s it,” he laughs. 6 years on, and Astroscale is a very different story. Recently named Forbes Japan’s Startup of the Year 2019, it is headquartered in Japan with branches in Singapore and the UK, as well as an office to be opened in the U.S. in 2019. With a firm focus on development, they have raised  USD 102 million to date. “Space costs a lot,” explains Nobu. “So, the only way for us to survive is to raise money quickly and prove ourselves even quicker.” One of their latest inventions is the ELSA-d spacecraft, a small, dancing satellite that takes down space debris at a relatively low cost. Essentially a chaser that synchronises with the motion of a targeted object, it captures the pieces with a powerful array of electromagnets. “It’s like a dance and a kiss,” Nobu analogises. After which, the junk is then forced down to the atmosphere where both the chaser and satellite burn up.

Next, they plan to take things one step further. “We are going to launch the world’s first space debris removal spacecraft in early 2020,” announces Nobu. “If a car breaks down on a highway, it needs to be taken out so that the traffic can continue to flow. The same applies to the lower earth orbit: companies have to remove dead satellites before they put up new, operational satellites.” As far as Astroscale are concerned, the need to clear the route for flow has never been more critical. Life as we know it could depend on it.