Your Guide to AgriTech in Japan

Global food demand is growing, but food supply is increasingly constrained by dwindling resources, urbanisation, climate change, and water shortage. AgriTech is the sector solving this problem. In this instalment we are diving into Japan, background facts on AgriTech in Japan, points to note, and startups to watch for.

In Japan, geographical, economic, policy and cultural factors have combined to create the issues currently facing its agriculture sector: increasingly abandoned farmland (on top of the country’s already scarce land), small farm sizes that don’t allow for economies of scale, an uneven range of products (the growing of rice is protected, for example, but at the expense of wheat and soy), and a heavy reliance on food imports. The most pressing problem of all is the aging population. The average age of farmers in Japan is now 67, and by 2040, there will be a labour shortage of 200,000 farmers, not to mention the loss of long-cultivated expertise in agriculture. AgriTech in Japan is estimated to grow from US$103 million in 2017 to US$322 million by 2023, and is gearing up to address these issues. Facing these labour shortages, a focus is placed on technological innovations which will assist and replace workers. As many of Japan’s farmers are part-time (they contribute 60% of the total rice produced), labour-saving technology will also help them continue this arrangement. Japan is compensating for its land scarcity with what it has in abundance: technology and capital. The government’s Strategic Innovation Promotion Program is heavily prioritising WAGRI and smart farming. WAGRI is a data platform developed by cross-sector collaborators, which aims to give farmers data about soil condition, climate, and market trends. In conjunction with the development of the extra-accurate QZ Satellite System, emphasis is being placed on drone-based automated equipment. Regulations for drone use were relaxed in 2019 and drone-approved farmland will be expanded to 1 million hectares by 2022. Automated greenhouse systems are another important research and development area.

Although Japan’s agricultural system has historically been top-down, where technology is distributed from public-sector scientists to farmers, innovation is now shifting. The government welcomes collaborations between domestic and foreign partners to develop technology for local farmland needs, the annual, international AgriTech Summit Tokyo offering networking opportunities for these potential partnerships. Private-sector corporations, such as Mitsubishi, Fujitsu, Toyota and Panasonic, are heavily investing in AgriTech and attracting small-scale startups. Founded in 2013, Farmnote provides a software service for livestock herd management. On its cloud-based digital platform, users can visualise farm management and get recommendations for ideal practices by entering specific data about their livestock animals’ health, feeding schedules, etc. The company is developing wearable devices for monitoring and collecting behavioural data on livestock.

Founded in 2015, Nileworks’ vision is “Precision Agriculture from the Air” and it has been developing drones for agricultural pesticide spraying. The drones can fly autonomously with centimeter-level precision. They have mounted cameras that can provide real-time diagnoses of the health and growth of individual rice stalks and can spray the optimal amount of fertilisers and agrochemicals according to this data. This drone tech simultaneously reduces labour required and improves yield and quality. Founded in 2017, inaho has developed an AI-based automated vegetable harvesting robot. Using image recognition, the robot determines good crops for harvesting and a robotic arm automatically harvests the yield according to shipping standards – eliminating the need for human labour. GRA Inc. was founded in 2012, a few months after the Tohoku disaster in the Miyagi Prefecture, an area famous for its strawberries. It has an automated indoor greenhouse farm that produces high-quality strawberries all year round. It also provides farming equipment and know-how for the cultivation and sales of strawberries.

Now funded by corporate giants like Mitsui, Kagome and Toyota, Kajitsudo has become the largest baby leaf production company in Japan since their founding in 2005. Its range of pesticide-free vegetable products include spinach, lettuce, coriander leaves, and soybean products. They use low-cost, weatherproof greenhouses, which allows them to cultivate up to 14 crops a year. Greenhouses cover 11 percent of the land used to cultivate vegetables in Japan, but account for 15 percent of total output, or US$1.6 billion- farmers who use them can have double the revenue of those who use open fields as they more consistently produce high-quality vegetables. 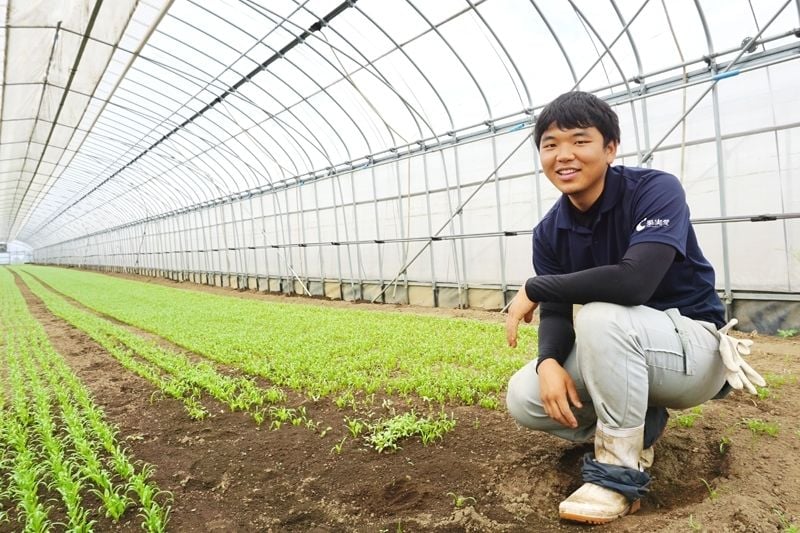 Japanese startup Tierraponica, was founded in 2018 by the Asian biotechnology group Chitose Group, cultivates high-quality crops using their novel hydroponic technology which uses different types of organic matter from food factories. This method also promotes a circular economy. Their hydroponic design can be set up in any location, including indoors and on rooftops, making it an ideal solution for boosting the self-sufficiency of cities. They see enterprise potential in Southeast Asia, and are already in discussions with firms in Thailand and Singapore who are interested in using their natural matter to domesticate hydroponic crops.