Our curation of the 12 best movies for entrepreneurs will give you that extra push you need to start making a big difference in the world.

A great movie is able to transcend its entertainment value to provoke new perspectives, a change of heart, and inspire minds. In the midst of the current – and worsening – economic downturn, we’ve collated some of our favourite motivational movies as a purposeful distraction, to help lift entrepreneurial spirits and remind you that pessimistic circumstances can, and will, be overcome.

Depicting the extraordinary tales of inspiring entrepreneurs, these are the best movies for entrepreneurs, serving to remind us why the many obstacles and long hours put in, can all be worth it. So, get comfy and prepare to binge on our selection of motivational movies, taking away the life lessons that are essential for the entrepreneurs of tomorrow.

A Will Smith classic, The Pursuit of Happyness retells the incredible life-story of Chris Gardner. One of the best movies for entrepreneurs, the plotline movie follows Chris, an American man who has hit rock-bottom, losing his job, life earnings, house and wife all within the blink of an eye. What’s more? He’s also left to take care of his son. Fighting for survival, Chris takes refuge everywhere from homeless shelters to subway toilets, whilst juggling a gruelling unpaid internship as he takes his chance on securing a stockbroker position.

The biographical drama highlights Chris’ ability to thrive in the face of adversity – his drive for success, positive mindset, and strong work ethic – even in the hardest of times – are truly inspiring. Life can always take unpredictable turns and the world may sometimes feel like it’s working against you, but it’s how we rise against the odds that comes to define who we are.

Key Takeaway: “It’s okay to fail, but it’s not okay to quit.” Accept your failures and setbacks – use them to fuel your motivation to work harder and smarter next time around.

Documenting both the rise of the personal computer and the concurrent rivalry between the two tech titans that catalysed the digital revolution, Steve Jobs and Bill Gates, Pirates of Silicon Valley delves into the darker realities that permeate the business world, including intellectual theft, toxic egotism, and manipulative tactics. Charting their journeys from humble beginnings in 1971 to Jobs’ eventual return to Apple in 1997 (and his new financial partnership with Gates!), the movie demonstrates that success can be achieved through passion, hard work, and determination, and is a hoot from beginning to end.

Key Takeaway: Be confident. Be your own best advocate in selling yourself, your product, and your company to the wider public. Forrest Gump is the all-time classic epitome of an underdog story. Tackling the world handicapped, and with unassuming innocence, Forrest accidentally becomes a firsthand witness to American history, having been thrown into major historical events spanning from the 1950s to 1980s. Against all odds, he achieves fame and financial success of his own accord, from earning a spot on the All-American Ping Pong Team to founding the Bubba Gump Shrimp Company. Empathising with Forrest’s everyday struggles, the Academy Award-winning film tells an uplifting story of overcoming obstacles, unlocking one’s true potential, and ultimately achieving remarkable success.

Key Takeaway: “Life is like a box of chocolates. You never know what you’re going to get.” If you can’t control the situation, control your own experience – this is now more relevant than ever.

Based on the real-life story of American inventor and entrepreneur Joy Mangano, Joy explores the unique obstacles that women must face and subsequently overcome if they are to be respected in the business world. Following the journey of a divorced mother of two, Joy sets the stage for an emotional journey, fighting endless battles against both personal and professional struggles. Strikingly, the movie reveals the brutal truth that people don’t like to see you succeed – even those you thought were closest to you. Now globally recognised as the inventor of the Miracle Mop, see how Mangano fought against the odds on multiple fronts to claim her spot in leading a global business empire.

Key Takeaway: Age is not a limit. With passion and humility, it’s never too late to start something from scratch. The popular Bollywood film, 3 Idiots, challenges societal ideologies on pathways to success. Based in India, the dominant ideology is based largely on academic sacrifice, through long hours of study as well as a strict adherence to parents’ wishes. Centred on the friendship between three college students Farhan, Raju and Pancho, the movie is able to challenge orthodox views through their somewhat rebellious behaviour. Significantly, Rancho, who never studies or cares about his grades, graduates top of his class, crediting his academic success to his true passion for engineering – a trait which the others lacked. The thought-provoking movie inspires us to do what we love because that’s where you will be able to thrive.

Key Takeaway: “Follow excellence and success will chase you, pants down.” Pursue your own excellence, rather than what others believe to be good for you.

Originally an innocent idea sparked in a Harvard dorm bedroom, The Social Network recounts the story of how Mark Zuckerberg turned an ambitious startup into the world’s biggest social media platform, Facebook. Providing an all-too-familiar glimpse into the cutthroat world of startups, witness how Zuckerberg’s competitive spirit helps him navigate through painful legal woes and financial hurdles. One of the best movies for entrepreneurs, The Social Network reminds viewers that actions have unintended consequences that may make you enemies along the way. Entrepreneurs must be able to withstand sustained confrontation and know to fight for their own ideas at the right times, instead of adjusting the product to suit the needs of others.

Key Takeaway: “You don’t get to 500 million friends without making a few enemies.” Don’t be disheartened by minor industry criticisms; they don’t define your capabilities as an entrepreneur. Falsely sentenced to life imprisonment for the murder of his wife, The Shawshank Redemption steps into the shoes of Andy Dufresne – a successful banker turned unconventional prisoner. Taking on the cliche ‘rebuilding yourself after hitting rock bottom’, Andy shows us how to make the most out of every unfair situation life puts you in. Through his time at the Shawshank Penitentiary, his persistence earns him small, but significant successes such as securing funding for an improved prison library. Building on a central theme of hope, Andy’s unrelenting determination is the drive that gives him the will to live and persevere in the bleakest circumstances.

Key Takeaway: The most important thing to remember in troubling times is not to lose hope – it’s the biggest driver that inspires action.

Taking on a sporty spin to the classic ‘David and Goliath’ story, Moneyball follows a budget baseball team which strategically attempts to use computer-generated analytics to select undervalued players to form a team that triumphs over stadium giants. In challenging the norms of game tactics, protagonist Billy Beane looks beyond the horizon to realise the value that comes with unwavering grit and of smarter, technological innovations. One of the best movies for entrepreneurs, Moneyball mirrors the parallels of small startups often going up against existing market oligopolies, recognising the entrepreneurial value of risk-taking and outside-the-box thinking.

Key Takeaway: Embrace new data technologies in the modern age! It may just be the key to drive your business to achieve unparalleled wonders of success. An Indian comedy-drama film that delineates the struggles that come with working in a toxic, competitive, office environment, Rocket Singh: Salesman of the Year follows a fresh grad-turned-oddball-salesman as he struggles with the cut-throat realities that come with his new profession. Not only is the hero, Harpreet Singh Bedi, routinely singled out and humiliated by his colleagues and employers, but he also bears witness to the intricacies of a corrupt company culture. Yet, instead of letting it wear him down, this experience eventually pushes him to embark on a mission of redefining the sales industry through more ethical practices. Henceforth, Harpreet chooses to focus heavily on customer satisfaction rather than sales numbers, paving an alternate way into the sales industry.

Key Takeaway: Providing a fantastic customer experience is just as important as padding the bottom line when it comes to evaluating the success of a business.

Oscar-winning movie The Big Short zooms in on the lives of the Wall Street investors who foresaw the build-up to, and then exploited, the now-infamous 2008 financial crisis. Though perforated with dizzying terminology, this witty picture is more than just financial jargon and receding hairlines; it pokes fun at the absurdity of the subprime mortgage crisis and follows how leading character, Michael Burry, navigates through careful judgements of risks, opportunities, and corruption.

Key Takeaway: Use your knowledge to your advantage, but understand the importance of the choices you make and never blindly act on the advice of others. A visionary, albeit controversial, salesman, Ray Kroc, stumbles upon what began as a humble burger joint run by two brothers, and converts it into the revolutionary McDonald’s food chain we’ve all come to know today. The Founder delves into the problematic morals and ethics behind the global franchise, and follows Kroc’s almost flawless execution in buying out the original founders to construct his vision into a reality. Although the movie largely roots against the protagonist, it’s impossible to deny the fact that McDonald’s still stands as the most well-recognised fast-food brand in the world – a testimonial to Kroc’s genius.

A hidden gem of Thai movies, The Billionaire is loosely based on the story of Tob Itthipat Peeradechapan – one of Thailand’s youngest entrepreneurs and the man behind the notorious seaweed brand ‘Tao Kae Noi’. A school dropout at the age of 17, Tob’s inspirational story led him from selling fried chestnuts at a supermarket kiosk to creating the ultimate staple seaweed snack amongst Asian households. Following his many accomplishments from online gaming to business ventures, this movie will help you tune in to the engaging story of a teenager who defied all expectations to become one of Thailand’s youngest billionaires (in Baht).

Key Takeaway: “If you have a goal and you dedicate yourself to it, you can overcome any obstacle placed in your path.” 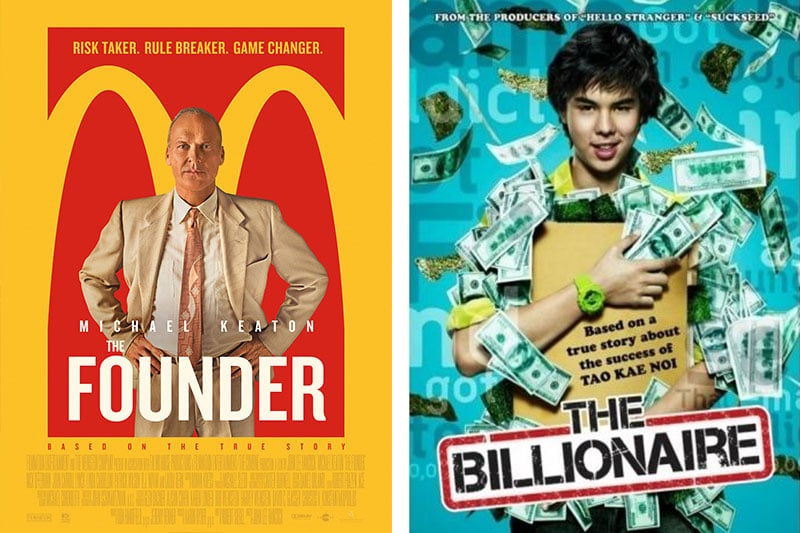