From Maya Angelou to Sylvia Plath, we’ve compiled 7 of our favourite inspirational poems for women by some of the most powerful women poets!


It’s March. Which means two things: One, it’s Women’s History Month and two, it’ll soon be World Poetry Day. With that in mind, we’ve collated 7 of our favourite inspirational poems for women from some of the world’s most brilliant women poets to both empower and inspire you – irrespective of whether you’re a man, woman or child. So whether you’re discovering these gems for the first time or are simply reacquainting yourself, we hope you find some meaning in our carefully curated collection of inspiring poems from some of our favourite women poets.

Our toes, our noses
Take hold on the loam,
Acquire the air.

Nobody sees us,
Stops us, betrays us;
The small grains make room.

Soft fists insist on
Heaving the needles,
The leafy bedding,

Even the paving.
Our hammers, our rams,
Earless and eyeless,

Perfectly voiceless,
Widen the crannies,
Shoulder through holes. We

Diet on water,
On crumbs of shadow,
Bland-mannered, asking

We are shelves, we are
Tables, we are meek,
We are edible,

Nudgers and shovers
In spite of ourselves.
Our kind multiplies:

We shall by morning
Inherit the earth.
Our foot’s in the door.

American confessional poet and writer Sylvia Plath was as famous for her personal life as she was for her works, almost all of which catalogued her enduring despair, criticism of patriarchy, and palpable obsession with death. In her poem ‘Mushrooms’, Plath compares the mushrooms, which are fragile, voiceless, meek, and unnoticeable, to the plight of women at the time. But just as the mushrooms manage to grow and flourish in spite of everything, so too will women rise up and escape the societal norms that they have so long been expected to follow. If you are a fan of this haunting verse, we recommend checking out her poems ‘Lady Lazarus’ and ‘Daddy,’ as well as her novel The Bell Jar.

You may write me down in history
With your bitter, twisted lies,
You may trod me in the very dirt
But still, like dust, I’ll rise.

Does my sassiness upset you?
Why are you beset with gloom?
’Cause I walk like I’ve got oil wells
Pumping in my living room.

Did you want to see me broken?
Bowed head and lowered eyes?
Shoulders falling down like teardrops,
Weakened by my soulful cries?

Does my haughtiness offend you?
Don’t you take it awful hard
’Cause I laugh like I’ve got gold mines
Diggin’ in my own backyard.

Does my sexiness upset you?
Does it come as a surprise
That I dance like I’ve got diamonds
At the meeting of my thighs?

Out of the huts of history’s shame
I rise
Up from a past that’s rooted in pain
I rise
I’m a black ocean, leaping and wide,
Welling and swelling I bear in the tide.

Leaving behind nights of terror and fear
I rise
Into a daybreak that’s wondrously clear
I rise
Bringing the gifts that my ancestors gave,
I am the dream and the hope of the slave.
I rise
I rise
I rise.

Poet, dancer, singer, activist, and scholar, Maya Angelou is a world-famous author who is best known for her 1969 memoir, ‘I Know Why the Caged Bird Sings’, which made literary history as the first non-fiction bestseller by an African American woman. The main themes of her works include love, loss and gender and racial discrimination, and ‘Still I Rise’ is no exception. An inspiring and moving poem that celebrates self-love and self-acceptance, ‘Still I Rise’ powerfully depicts the struggle that comes with overcoming the prejudice and injustice that women of colour face on a daily basis. Fondly referred to as the “People’s Poet”, Maya has also written other inspiring poems, including ‘Phenomenal Woman’ and ‘Caged Bird’. She didn’t leave a tangle in.
Her comb found every strand.
Sadie was one of the livingest chits
In all the land.

When Sadie said her last so-long
Her girls struck out from home.
(Sadie had left as heritage
Her fine-tooth comb.)

Maud, who went to college,
Is a thin brown mouse.
She is living all alone
In this old house.

Gwendolyn Brooks is one of the most highly regarded, influential, and widely read poets of 20th Century American poetry. As a woman of colour, her works centred around the everyday life of urban blacks. Sadie and Maud revolves around two sisters – Maud, who conformed to society’s expectations by attending college but ends up living all alone in her old house, and Sadie, who, despite breaking all the socially constructed ideals by staying home and having two babies out of wedlock, in the end, finds true happiness. The story of Sadie and Maud demonstrates the impossible standards that were set forth for women at the time and highlights how going against the grain of society is and should be perfectly acceptable. Be sure to check out her prize-winning poems ‘We Real Cool’ and ‘A Bronzeville Mother Loiters In Mississippi. Meanwhile, A Mississippi Mother Burns Bacon’.

Moon marked and touched by sun
my magic is unwritten
but when the sea turns back
it will leave my shape behind.
I seek no favor
untouched by blood
unrelenting as the curse of love
permanent as my errors
or my pride
I do not mix
love with pity
nor hate with scorn
and if you would know me
look into the entrails of Uranus
where the restless oceans pound.

I do not dwell
within my birth nor my divinities
who am ageless and half-grown
and still seeking
my sisters
witches in Dahomey
wear me inside their coiled cloths
as our mother did
mourning.

I have been woman
for a long time
beware my smile
I am treacherous with old magic
and the noon’s new fury
with all your wide futures
promised
I am
woman
and not white.

A self-described “black, lesbian, mother, warrior poet”, Aurde Lorde’s works frequently revolve around racism, sexism, homophobia and classism. In ‘A Woman Speaks’, Lorde powerfully illustrates the inconsistencies in how black women are viewed whilst also throwing light on her own ongoing battle to define her identity outside of society’s norms. Her works have provided many readers with the confidence to live their lives as they choose. For more insights into her sheer depth of feeling, have a read of her poems ‘For Each Of You’ and ‘Now’. 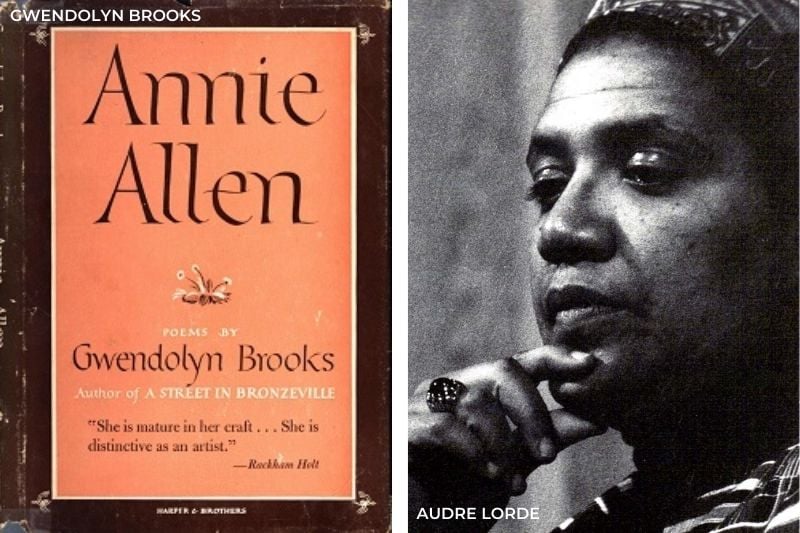 She’s a copperheaded waitress,
tired and sharp-worded, she hides
her bad brown tooth behind a wicked
smile, and flicks her ass
out of habit, to fend off the pass
that passes for affection.
She keeps her mind the way men
keep a knife—keen to strip the game
down to her size. She has a thin spine,
swallows her eggs cold, and tells lies.
She slaps a wet rag at the truck drivers
if they should complain. She understands
the necessity for pain, turns away
the smaller tips, out of pride, and
keeps a flask under the counter. Once,
she shot a lover who misused her child.
Before she got out of jail, the courts had pounced
and given the child away. Like some isolated lake,
her flat blue eyes take care of their own stark
bottoms. Her hands are nervous, curled, ready
to scrape.
The common woman is as common
as a rattlesnake.

American poet and activist, Judy Grahn’s works revolve around the power of feminism and her experience as a lesbian. ‘Ella, in a square apron, along Highway 80’ depicts a fiercely tough waitress who gains zero satisfaction from what she does – a woman who is working to live and not living to work, and who is plainly not to be underestimated or defied. The poem is part of a larger collection of portraits depicting various women breaking free from patriarchal modes of representation, whilst also emphasising that while some women may seem similar, there really is no such thing as a common woman. Some other must-reads of Judy’s include ‘Helen In Hollywood’, ‘Sheep’ and ‘Slowly: a plainsong from an older woman to a younger woman’.

Universally recognised for her highly personal, confessional verse, Anne Sexton is one of the most well-known artists of the mid-20th century. Her works cover everything from life and death to love and madness, whilst also touching upon themes such as meanings of gender, the search for fathers, mother-daughter relationships, and sexual anxiety. ‘Her Kind’ explores its persona’s struggles to conform to the societal expectations and norms levied against women at the time. Each stanza depicts a different side to the persona – the witch, the mother, the adulteress, further illustrating her unwillingness or inability to diminish herself in order to fit into the strict confines of society’s definition of a woman. Our other top picks include ’45 Mercy Street’, ‘Anna Who Was Mad’ and ‘Cinderella’. 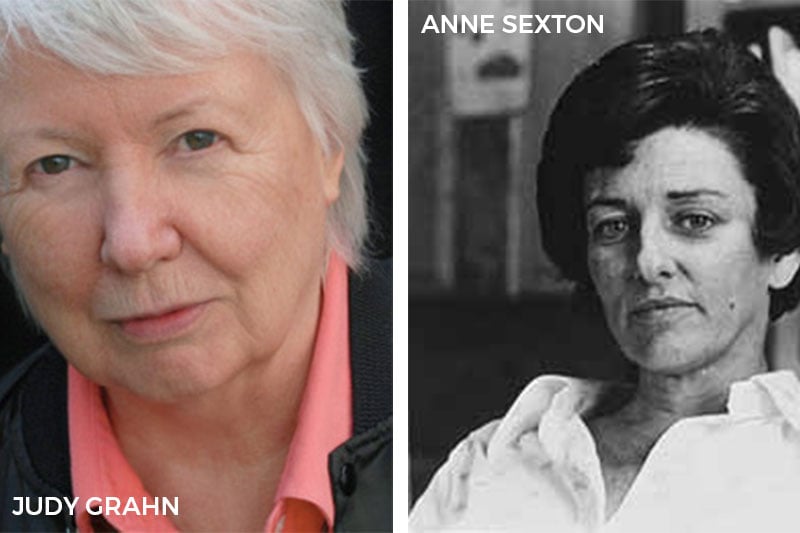 Part of a new generation of Insta-poets, Indian-Canadian poet Rupi Kaur uses confessional poetry to explore themes of silence, abuse, independence, individualism and personal power. Her poem ‘Being Independent’ centres on a girl fighting for her place in this world, yearning for independence. The 27-year-old, who has already had her work on The New York Times bestseller list, is today the face of modern poetry with hits such as ‘progress’, ‘the sun and her flower’, and ‘self-harm’. ‘‘Hope’ is the Thing with Feathers’ by Emily Dickinson

I’ve heard it in the chillest land –
And on the strangest Sea –
Yet, never, in Extremity,
It asked a crumb – of Me.

Widely considered to be one of America’s most influential poets of all time, Emily Dickinson’s modern, unpredictable style had a profound impact on 20th-century poetry. Unknown as a poet outside of a few select family members and friends, most of Emily’s works were discovered and published posthumously. One of her most well-known poems, ‘”Hope” is the Thing with Feathers’, uses an extended metaphor to liken the insuppressible nature of hope to a bird that is perpetually perched within the human soul, even amidst a raging storm. Ultimately, it serves as a reminder that, no matter the circumstance, hope will always live inherently within us, and that we can weather any storm, even in the harshest of conditions.