Little Ones: This Japanese NPO is Ending Stigma Against Single Mothers
Art & Culture

In Japan’s conservative society, single motherhood is taboo – and consequently, single mothers often fall victim to poverty and social isolation. The culture of shame makes it difficult for them to find gainful employment, leading to financial uncertainty that, in turn, deters landlords from granting them tenancies.

Founded in 2008 by Japanese social activist Kunihisa Koyama, Little Ones is an award-winning non-profit organisation dedicated to supporting single-parent families and raising awareness of children’s poverty. In 2011, Little Ones began its mission to provide single mothers with safe, affordable, and stable housing by making use of the nation’s problematic glut of empty homes.

The organisation has since helped to house over 300 single mothers in Tokyo, Osaka, and Chiba, and gained international recognition, winning a World Habitat Award in 2018. We sat down with founder Kunihisa Koyama to discuss how Little Ones is working to change the conversation surrounding single motherhood in Japan. How did you first get involved in supporting single-parent families?

After graduating from the University of Oregon, I returned to Japan to work as a scriptwriter for a television production company. Although I’ve never been a single parent myself, I had the opportunity to jump into the field of supporting single-parent families when one of the TV programmes I worked on covered single-parent families. Back then, child poverty in Japan wasn’t even in the news, so I was shocked to find that the support for single mother available in Japan was minimal. I realised that support from the government was way too slow – in urgent situations, such as homelessness, unemployment, and starvation, support should be provided right away.

Why do you think single mothers have a difficult time finding support in Japan?

In the US, there is a clear division of support roles and support groups are quick to respond. Those in need know exactly where to turn when they are in trouble. But in Japan, there is a “wall” of sorts – it’s frowned upon to talk about one’s problems and worries, and support for single-parent families is very rare in Japan. Single mothers also don’t have much time or many opportunities to ask for help.

What were the biggest obstacles you faced when creating this organisation?

In Japan’s history, it’s rare for a man to found a support organisation for women. There is a misconception that only women should support women, that men should not be directly involved unless it’s in the form of a donation. When I first started Little Ones, I was often expected to be wealthy or a single father. Even now, 10 years down the road, people still believe these myths – someone has even said, “Mr Koyama must be a gay person. That is why he can understand how women feel. If so, his actions are acceptable.” They think that men who are involved in women’s life must be gay. That is so silly.

I don’t try to clear up these misunderstandings. One’s gender is not important in supporting someone’s life – all genders should be welcome. The media is also a problem. They often want to make me out to be a ‘hero’. It’s easy to spin the story into ‘male hero saves a poor damsel-in-distress’, so I always check with the media before they broadcast our story to make sure that isn’t the case. It is so sad and silly that other male activists in Japan are often given the image of being heroes. 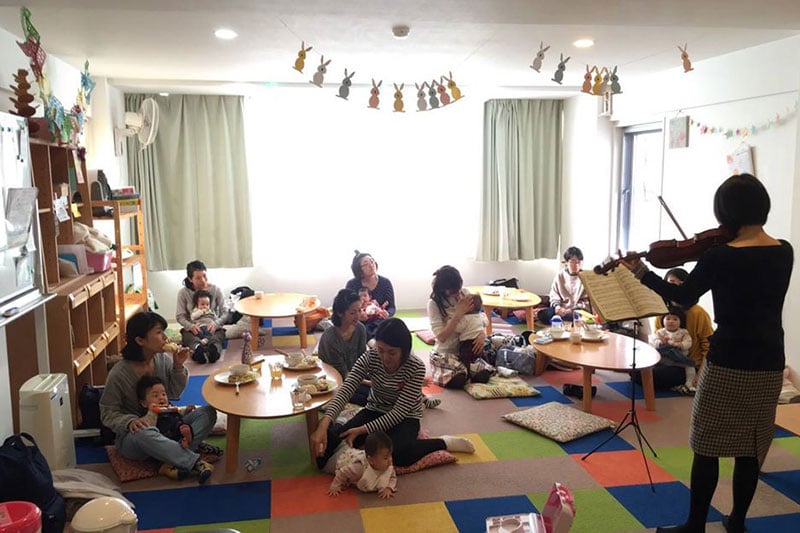 What are some of the biggest challenges single mothers face in Japan?

Single mothers are a very vulnerable group and they face many challenges that are often hidden and unique to Japan due to its conservative culture. According to the Ministry of Health and Welfare, the number of single-mother households grew by 50% between 1992 to 2016. Although Japan has historically had a very low divorce rate by global standards, recent data indicates that the rate of divorce has doubled in the last 20 years, with 1 out of 4 marriages resulting in a divorce. Unfortunately, unlike Western countries, there is no such thing as joint custody. Under the Civil Code in Japan, parental rights are only given to one member of a divorced couple, and 90% of the time, custody will go to the mother. Laws and practices centred around divorce, custody, alimony, and child support in Japan are below Western standards – surveys indicate that only about 10% of divorced mothers receive any child support. There is also a significant gender wage gap in Japan where working women earn roughly 30% less than men in a similar position.

How can we overcome these challenges?

Poverty is a complex and difficult social issue that isn’t easily solved. There is no one solution that can solve all social issues – it takes a combined operation, not a single point breakthrough. Little Ones has created solutions for providing affordable housing and online support. Other organisations offer educational support or advocate their causes to the central government. To fight poverty, it’s crucial that we work from multiple angles at the same time. We don’t have time to lose; there are children waiting for our support.

Do you think Japan’s attitude towards single mothers will change?

The situation of single mothers remains largely unchanged and they continue to face hardships in many situations. It’s also hard to change the social misconceptions of single mothers – we have to educate the media. However, Japan’s central government has recently begun paying attention to these issues. They’ve set up a special grant to tackle child poverty and are looking to revise laws concerning the provision of childcare allowance and welfare services to single mothers. So, I think the welfare system is getting better.

Even though the central government has taken measures to support single mothers, however, local governments cannot enact them because of local issues like a lack of budget or resources. My job is like a negotiator and a translator – I have worked with many local governments to create a support system for single mothers. I talk to them, help them with the difficulties they’re facing, and try to provide a mutual solution.

What’s in the future for you and Little Ones?

Right now, Little Ones is creating a social lending scheme for single mothers, which will be highly based on their potential score rather than their credit history. Our next milestone is providing financial freedom for single mothers and their children.

In the end, I am not a hero. I just want to be a good mentor for kids. As a mentor, I have to support all my juniors. Ultimately, being a good mentor is all that matters in life to me.