Vietnam’s push for economic success has left playtime in the dirt. Think Playgrounds wants to bring the joy back with non-profit playgrounds across the country. They tell Hive Life why having fun is essential to city life.

What is the cost of success? For Vietnam, the answer could be happiness. While the country’s economy is one of the fastest-growing in the world, set to increase by 6.7% this year, it ranks low on the happiness index at 94th out of 150 countries. Wary of the price being paid for such runaway economic development, in 2013, Architect Chu Kim Duc and Journalist Nguyen Tieu Quoc Dat decided to do something about it, founding Think Playgrounds with a mission to bring play back into people’s lives and fill the Asian country’s streets with laughing children again. As Dat sees it, parents who question the value of play in daily life may have forgotten how happy it was to be a child. Growing up in Hanoi, she and Duc spent a large proportion of their time having fun. “Even though we didn’t have a playground to play in, we had many things to play with. I think my generation had more time to play because our parents were always busy. It used to be very safe to play outdoors, even late at night just on the street. There weren’t a lot of cars so it was very quiet back then. It’s really sad to see these places disappear. The kids nowadays don’t get chances to play.” said Duc.

The pair don’t think this issue is specific to Vietnam. “We see the problem in places like Bangkok where there are shopping malls everywhere. You can do everything in the mall, but it is not an outdoor activity,” says Dat. “A playground is a place where the whole community can come together. It’s not only for children, but for parents and grandparents, too. They often do some yoga and dancing classes. Playgrounds make the whole public atmosphere better.”

It was their encounter with American tourist Judith Hansen that spurred Dat and Duc to actually do something about this problem. “She came to photograph playgrounds when she came to Hanoi, but she couldn’t find any real ones, only empty space, The people, they think this empty space is a playground, but it’s not,” recounts Dat. From there, the duo used recycled and scrap material to build their very first playground in Hanoi which opened in 2014. “It was very successful. It was simple and cheap. It only cost about USD 500 and many volunteers came to help. It brought the community together. Around 2000 people came to our first playday!” 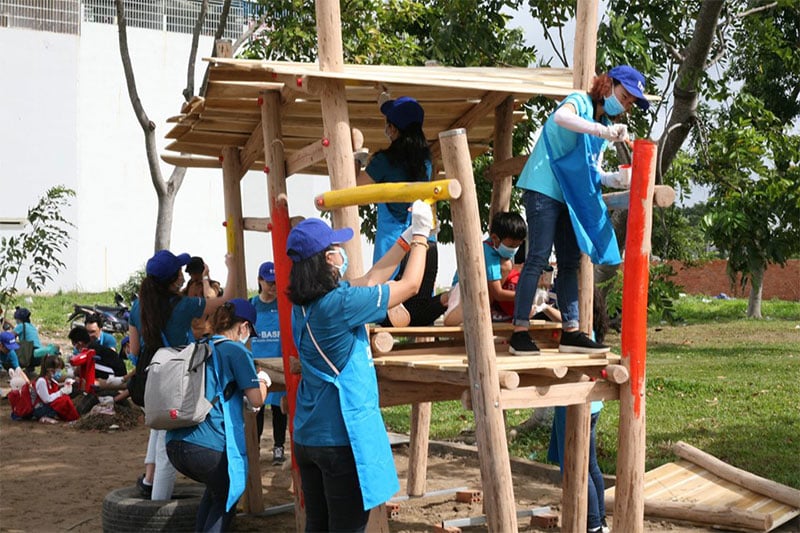 Although building non-profit and low budget playgrounds for the needy and poor is Dat and Duc’s passion, Think Playgrounds currently functions as a social enterprise, whilst they take on work from the private sector to generate funding for their charity work. “We always have to think about business. We have to survive in the market, so we can’t rely on funds from other NGOs because Vietnam is not a poor country anymore. There is less and less funding coming from outside the country,” says Duc. Working out of their headquarters in Hanoi which doubles up as their wood workshop and scrap store, the pair employ a total of 13 people – seven woodworkers and six office workers. In total, so far, they have built approximately 150 public non-profit playgrounds scattered across Vietnam, with 50 of them based in their hometown Hanoi since the project’s inception.

Looking into the future, Dat and Duc hope Think Playgrounds will spark real change that goes beyond their own work and even the actual, physical spaces they are creating. “The value of play seems to be undervalued by society,” urges Duc. “I think playgrounds are beneficial for children, especially poor children because it’s an inclusive space. Some parents often ask what skills the children learn on the playground and I always say, ‘No skills!’ Structured education is strong in Asian countries, but it is also important for children’s health to have unstructured education as well.”