Inspired by cafés in Sydney, one young restaurateur returned home to Saigon to open The Other Place, an experimental restaurant aimed at a new generation of foodies. Read Vicky Lam’s story here.

The word ‘other’ can come with slightly derogatory connotations, but for Vicky Lam, co-founder of new, experimental – and extremely popular – Saigon restaurant The Other Place, it’s her calling card. On a mission to bring a new take on beautifully crafted food with true fusion at its heart, it’s a hip enclave tucked away in Ton That Dam’s Old Market where you can find dishes made with Vietnamese ingredients, prepared with a French twist, and finished off with a delectable mix of Japanese and Italian flair. Read on to discover her story. 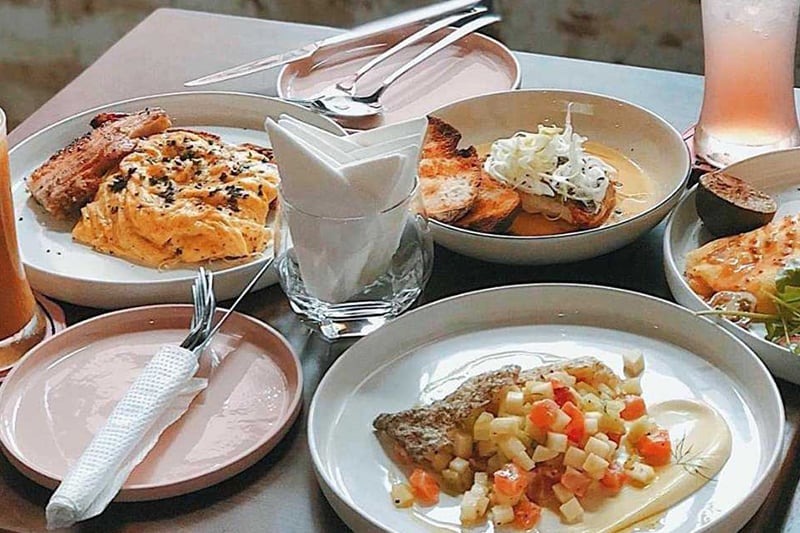 “It started off as a joke,” chuckles Vicky as she recounts how she happened across her restaurant’s name. “You know when you go out to eat with friends and everyone suggests something, but you disagree and say, ‘Nah, let’s go to the other place?’” With a name born out of banter, her joint’s ‘otherness’ runs far deeper than mere choice.

“Due to our war-ridden history, Vietnam hasn’t had time to cultivate its produce to its greatest potential. Hence, the way we cook has always been about making the best food out of whatever given to us,” she explains. “It is important to embrace the flexibility and no-waste aspect of the traditional ways of cooking. However, I think it’s also about time that we Saigoneers move on from our war-torn past with a more innovative cuisine that, instead of just coping with whatever we’re given, really utilises local produce. Hence, starting our journey with fusion food makes a lot of sense to me, as the way I see it, Vietnamese food itself is the pinnacle of fusion cuisine.” Before The Other Place, Vicky studied nursing in Sydney but eventually left the field to pursue a greater calling. “Nursing was not my passion. I wanted to come back to Vietnam and do something I’ve always wanted to do, which was to open my own restaurant,” she recounts. Initially, she came back to Vietnam in 2017 to take care of her ailing father. But, soon, her return triggered a whole new career. She started out in acclaimed chef Peter Cuong Franklin’s fusion restaurant Anan Saigon (winner of Trip Advisor’s 2018 – 2019 Certificate of Excellence) as part of the opening team and soon went on to open her own place.

Located in the middle of a traditional wet market in District 1, you can’t miss The Other Place. The crew behind it are all under the ripe age of 27, and with its millennial pink exterior, exposed brick interior walls and a carefully curated Instagram feed, the restaurant clearly speaks to a new generation of Saigoneers. “When I first started the restaurant, I knew I didn’t want a pretentious set of dishes,” says Vicky, “I wanted something fun and relaxed that was also of a high standard, offered in a cosy environment.” Vicky’s vision for their genre-blending food began with her time in Sydney. “I was inspired by the hospitality culture. In Australia, dishes don’t need to be just purely Middle Eastern, or French, or Chinese,” she explains. “I found it very inclusive.” She was deeply inspired by Sydney’s brunch culture, eventually creating a menu in her own place that is colourful, diverse and experimental — think ginger-glazed shiitake on their popular house-baked sourdough bread. For this reason, The Other Place is quickly gaining traction as a trailblazer bringing brunch culture to Saigon.

An x-factor behind the team’s success is their diverse backgrounds and expertise. The chef, Son Nguyen, whom Vicky met at Anan, is a Saigon native who has worked in Japanese, Korean, Vietnamese and Western restaurants. Jack New, the restaurant’s consultant from New South Wales, had two of his restaurants listed among Sydney’s top 20 cafés and has advised Vicky on the menu, bringing his adventurous spirit to their cocktail and food recipes. Restaurant-goers can expect to find new takes on old favourites. Take their twist on Bắp xào (fried corn), a traditional Vietnamese street food that’s normally made with sweet corn and dried shrimp. “Instead of serving it with shrimp, we serve it with bacon, curry sauce, lime, pepper and rice crackers. It has more texture and acidity,” says Vicky. Their quest to bring something new to the table raised a few eyebrows at first. “In the beginning, the locals were quite apprehensive or confused, wondering ‘What am I eating?!’ But, as time’s gone on, they’ve welcomed the dishes more and more.” With The Other Place currently ranking 17 out of 4,862 restaurants in Hồ Chí Minh City on Tripadvisor, it seems they certainly are, thanks to their sincere originality. To make sure they keep pushing forward, Vicky schedules regular experimentation evenings. “Every month, we pick a random Tuesday night, house the restaurant with 15 people, and create experimental dishes based on one food item,” she says. “Last time, we created six courses based on bacon.” And, it’s not just in the food scene that she wants to forge the future. The Other Place also adopts employment practices that aim to change the working environment found in restaurants around the city. “Working conditions in Vietnam’s food and beverage industry can be competitive and toxic,” she explains. “We wanted something different for our employees. They have to understand the science of everything that goes on in the restaurant, and I think because of the journey we provide them, they stay with us. We’re organising field trips for our employees to explore different methods of cuisine, rather than just staying in one area, learning one thing. They see their futures in the hospitality industry in a new way.”

With their beautifully crafted recipes, heartfelt hospitality and investment in their employees, The Other Place has been growing steadily. So what’s next for this hipster restaurant? “We have so many plans already in motion right now. I see a big, exciting journey ahead of us,” says Vicky heartfully. “We will continue to research and forge our own cooking philosophy. In fact, we’re upgrading every aspect of the restaurant in a few weeks. We’re also developing a new, exciting menu that focuses on dinner right now. The biggest project that our team is super passionate about, however, is to evolve our experimental Tuesdays into a dining experience series in which a host would introduce a certain star local ingredient, what we do to them and why to an audience of 14. The idea is to interact more with our customers and help them eat with awareness by providing them with a deeper insight into local produce and what we do to either retain or improve its integrity. I’m thinking of calling it The Asterisk Society!”

An Insider’s Guide to District 1, Vietnam