Asia Today: The Man Behind Two of Bangkok’s Hottest Bars

Niks Anuman-Rajadhon, the entrepreneur behind two of Bangkok’s most loved watering holes, Teens of Thailand and Asia Today, talks through how he’s breathed new life into a grungy neighbourhood with his innovative F&B concepts.

Chinatown’s Soi Nana in Bangkok has recently become known as one of the hippest hangouts in town. A lot of that is thanks to Niks Anuman, the 32-year-old entrepreneur and mastermind behind Teens of Thailand and Asia Today, two of the most popular bars located along this tiny, historic alley. He spoke to Hive Life about the appeal of an unloved neighbourhood and the future of Bangkok’s bar industry. 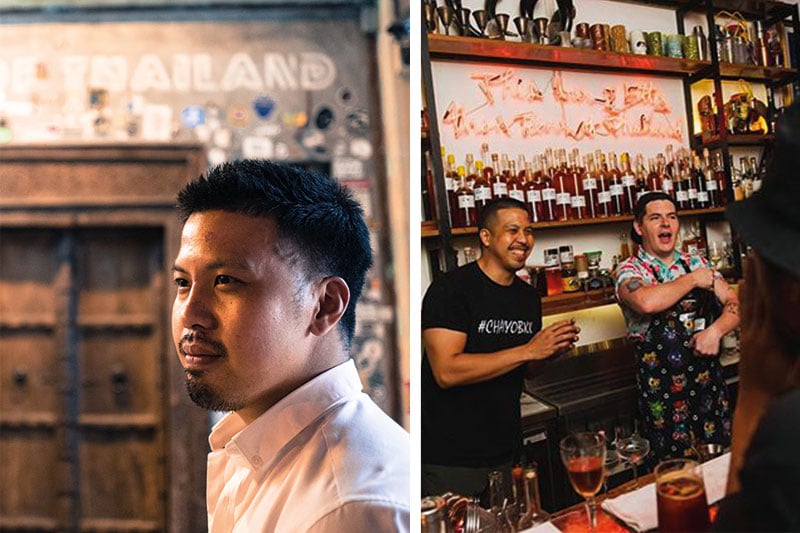 Under the umbrella of his cocktail catering company Vice Versa, Niks Anuman-Rajadhon has founded the Bangkok Gin Festival and the Bangkok Bar Show, but it’s his two underground, speakeasy-style bars in his hometown’s Chinatown district that have really made his mark. With a background importing craft spirits, he opened the first, Teens of Thailand, back in 2014, breathing new life into a grungy neighbourhood alongside it. “The whole feeling was just right. The vibe, the smell and the spice shops in the area – everything made sense,” he explains of his choice of location, with its grungy decor and winding line of low-rise, dilapidated buildings. “The area already has its charm, character and history. This is something you cannot find in the Sukhumvit area.”

Keen to preserve the heritage and characteristic of the shophouse that’s home to it, this small, unpretentious watering hole is home to concrete walls adorned with old movie posters and a buzzing crowd of cool kids perched nightly along its long, narrow bar. What it’s most famous for, however, is its standing as Bangkok’s first, truly specialist gin bar, offering up an exotic – and very locally inspired – take on the global staple. “I opened my first bar, not because I wanted to run a bar, but simply because I wanted to have a place where everyone can enjoy a true glass of gin and tonic,” says Nik. “We explore flavours from the streets and elevate them in ways never seen before. We did the first infusion with Thai tea and now we have infusions of chrysanthemum tea, jackfruit and pink salted guava.” Quickly, Teens of Thailand became famous, thanks to its hip vibe, great cocktails, and ubiquitous stickers that were popping up around town. Keen to progress, Niks then opened his second spot along the same road, Asia Today, in 2017. Here, he wanted to offer something a little more upscale. “Let’s admit it. Teens of Thailand is a good bar. It has its own charisma and style, but it’s also a shitty bar with poor seating and nowhere for people to stand,” he laughs. “That’s why Asia Today is proper and comfortable.” This second spot has carved out a niche within its neon-lit walls for creating cocktails made with exotic ingredients sourced all around Thailand. Niks and his team head up to Chiang Mai and Chaing Rai to source produce directly from local organic farmers to deliver something truly different, be that a Wild Honey Daiquiri made with honey from Khao Yai National Park or a ‘Tiger Ear’ rum cocktail featuring a key ingredient (the traditional herb Tiger’s Ear) that’s normally eaten with buffalo larb. As he says, “I can’t make good cocktails if I get my ingredients from supermarkets.”

For Niks, owning a bar is one thing, but being an active player and advocate in the industry is another as he seeks to establish himself as a figure bringing change to bar culture across Bangkok. With the launch of Bangkok Gin Festival in 2018 and the next one planned for November, he has helped celebrate his city’s thriving gin scene, encouraging leading brands to take part. Later this year, he’s also looking forward to launching the Bangkok Bar Show. Whether it’s via the introduction of craft brands or by shaking up locally sourced, exotic ingredients, showing the way forward for sustainable practices or shining a light on previously forgotten neighbourhoods, it’s all a way to strive for continued development in an industry that’s changing before his eyes. “Sustainability is not a trend. It is simply being more humane. As the market and industry continue to grow, so will new flavours, techniques and experiences. The trends will come and go; you just have to be where you are and stand for what you believe in.”

Check out our Insider’s Guide to Thonglor for a fantastic selection of buzzing bars, chic restaurants, and things to do.

Shaking Up Bangkok’s Cocktails with Creativity

Raising the Bar with Thai Liquor