The founders of The Golden Duck, Christopher Hwang and Jonathan Shen talk us through the unique business approach that has catapulted their hugely popular snack company to success.

Singapore-based entrepreneurs Christopher Hwang and Jonathan Shen and their gourmet snack company The Golden Duck have been featured in Forbes Asia’s 30 Under 30, but they aren’t content to sit on their laurels. “Innovation is the blood of the company,” says Jonathan. “Growth for the sake of growth isn’t enough. Our products have to bring value to our customers in ways that other brands can’t. A company is like a shark. It either has to move forward or it dies.” They talked us through the launch of one of Asia’s sexiest new snack brands and the marketing involved in making The Golden Duck a viral phenomenon.

Before the Golden Duck, Jonathan had been marketing head for a large F&B company alongside roles in several other startups, while Chris had been pursuing a Law degree at the National University of Singapore. “We met, rather unceremoniously, over drinks with mutual friends. Little did we know that we’d eventually run a bar and then a handful of businesses together,” says Christopher. “The Golden Duck was another in a string of projects that Jonathan and I have built, together and individually. It was also probably the last chance I would have given to entrepreneurship at that point,” he adds, citing setbacks such as a nightclub venture which cost them a loss of SGD 1M. The Golden Duck started from a simple enough premise: “We wanted to make better snacks. No formal mission statement, no five-year plan,” says Jonathan, whose previous experience in F&B had helped him identify the salted egg yolk trend and its prospects as a flavour for packaged snacks. They bootstrapped SGD 30,000 of their own savings to get the concept off the ground, working with a hands-on approach with every aspect of the process. “When we first started, we did everything ourselves – we helped in the kitchen, with packing and moving stock. We would make deliveries ourselves during lunch breaks,” he recalls. The business started off as a pop-up stall in Suntec City – and with a swift surge in popularity and increase in demand, they soon moved their production teams to larger kitchens, expanding to eight stores across Singapore before rolling out to hundreds of 7-Eleven stores and supermarkets across Asia and beyond, delivering to over 20 countries worldwide. In 2018 alone, they sold over a million packs of their hugely popular Salted Egg Yolk Fish Skin snacks.

You might also like You’ve Had The Meatless Burger. Is It Time To Tuck Into Meatless Fish?

Just like their constantly developing recipes, the roles Christopher and Jonathan play in their company have changed since the early days. “We’d love to roll up our sleeves and get our hands dirty, but at this scale, we can no longer function by executing tasks ourselves,” says Christopher. “As the company scales past 200 people, we need to delegate, trust our team, focus on the big picture, and share the vision with our team. I take care of research and development, production, finance and legal aspects of the company, while Jonathan manages the global brand strategy and communications. We share business development and split workloads consciously; we don’t waste energy working on the same thing. So long as our vision is aligned, we can focus on our own departments and press on together.”

Still, in that development, they have been determined to keep a firm handle on quality and the production process. Christopher explains the key to their success: “The secret sauce of The Golden Duck is that few companies can replicate the quality we give our customers. What we do at this scale requires customisation. Each recipe is born from a wok, an oven, a grill, and the scaling up of recipes is done in careful, deliberate parts, with customised machinery at every step and our quality assurance and production teams pouring over every detail in the process.” 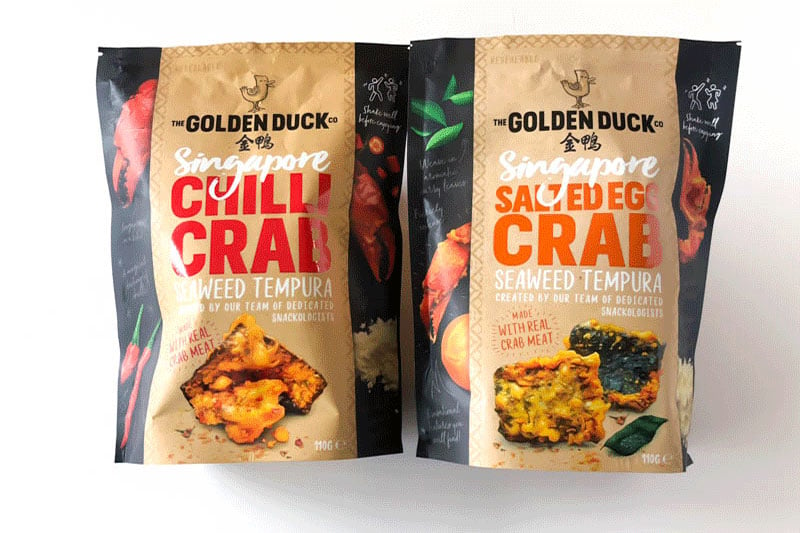 The company’s most famous product so far has been their Salted Egg Fish Skin snacks. The whole idea behind the crispy nuggets was to come up with a unique way to combine two food sources. “Fish skin, which has only been picking up as a food medium the past four years or so, is massively textured and can pick up flavour in a big way. It works exceptionally well with the real salted egg yolks we use,” says Christopher. Such experiments are one of the duo’s favourite parts of running The Golden Duck. “We’ve built this brand on salted-egg yolk snacks and have since added a few new flavours, namely Salted-Egg Crab on seaweed tempura, Chili Crab on seaweed tempura and Mala Hotpot. Our direction from here on is to continue to innovate,” says Jonathan. “We pride ourselves on building a company on fresh and exciting mediums that have yet to prove themselves and then improving upon them,” explains Christopher of the importance of bringing something fresh to the market.

Golden Duck may have brought a whole new genre of snacks to the market, but they’ve been very careful to bring a business and customer communication strategy that’s equally innovative. “People expect a product that doesn’t just deliver on the tangible aspects, but also on what the product stands for and is associated with,” says Jonathan. “We’ve been engaging with our fans since day one, offering benefits for being part of The Golden Duck snack family from private film screenings to exclusive invitations to events. Being a part of this family means partaking in a lifestyle we enjoy as foodies!” Along with a hugely active social media presence, they’re continuously promoting in fresh and exciting ways – take their ‘Sichuan Mala Hot Hot Pot’ online game where players ‘eat’ red peppers and ‘avoid’ purple peppers to attain scores they can post on Facebook, winning free Mala Hot Hot Pot packs.

“We also intend to address the demand for snacks in countries around the world,” Jonathan notes, as The Golden Duck looks toward increasing their standing globally. “It’s grown some fan bases abroad, but they’ve not picked up on it as readily as Asian communities have.” Their advice for anyone looking to take their brands global is all about localisation: “You’ve got to optimise your brand and product to give yourself the best chance of success within each market,” with their snacks being a prime example of a product targeted specifically at Asia’s consumer market. “The sweet spot to get something to stick is to add a twist to something familiar – just enough that it feels new, but not so much that it doesn’t feel strange. With the Salted Egg Fish Skin crisps, the engaging way it’s delivered through different mediums plays to many Asian cultures. That’s how you get a viral product.”

The pair’s now-famous road to success has not been without its fair share of obstacles. “It’s been a roller-coaster ride,” says Jonathan. “We started with no manufacturing experience, no funding, no back-up plan. We have gone to extreme lengths to make sure our customers always had a top-quality product, which in one instance involved throwing away 5000 packets of stock because our chef had made a mistake by using the wrong oil.” And, even though circumstances have changed, their mentality has remained consistent. “With a fast-growing business, you can’t take anything for granted. We’ve had weeks where everything seems to be going to plan, only to be faced with a string of complications that blow up in our faces. It’s like sailing a ship while it’s being built – you need all hands on deck whenever there’s a storm. And, when the tides have calmed? You strengthen up and prepare your crew for the next adversity.” It’s exactly this resilience in the face of adversity that they credit for not just their survival, but also their phenomenal success. “We have simply refused to let our failures define us,” states Jonathan. “That was the single constant that made us move forward, learn, and try again. Eventually, you reach a point where your perspective on failure changes and you realise that the only reason you have to stop is if you choose to.”